Behavior:
Able to detect and configure device in CAN@net II Configurator
Able to configure, start and stop device in VCI Device Server Control without errors
Unable to use device from canAnalyzer3 Mini (CA3M). Device is detected, but no connection is made. CA3M detects the CAN@Net but is unable to use the adapter. Attempting to start adapter communications stalls the program for 10-15 seconds, then errors out.

Notes:
Appears to be independent of Windows Firewall state; enabled, disabled or interface ignore results in the same behavior. Consistent across several different Windows installs, tested on both Windows 10 and Windows 7 (patched to final). Consistent between both CAN@Net II part numbers listed above. Consistent between direct connection and DHCP managed LAN.

I’m aware the CAN@Net II devices are EOL & have been replaced by the CAN@NET NT line; however they’re what we have to use at the moment.

What is the current device, filter, expert configuration of the CAN@Net II device? I may need to reach out to some of my developers for some insight into the problem. I have one set up, and i was able to connect with out issue.

I’m not clear what you’re asking as far as the “current device” goes? The attached data is from PN 1.01.0086.90001. No filters are set. I think the Expert Config options are only exposed for the NT line devices…? I haven’t seen that set of configurations. The device itself was reset using the dip switches when I started working on this effort. The computer was a fresh Windows install, with the driver kit from the website.

The current device is referencing the CAN@Net II device that you are tyring to connect with. There is a Main Webpage for that unit to set up the configuration.

These are CAN@NETII/VCI devices, they don’t have the web-server or the ASCII interface port…? nmap agrees that those ports are not listening.

My apologies on the confusion. Unfortunately, all i have are the Generic versions of these. I will escalate this issue for you to determine where it is occuring. 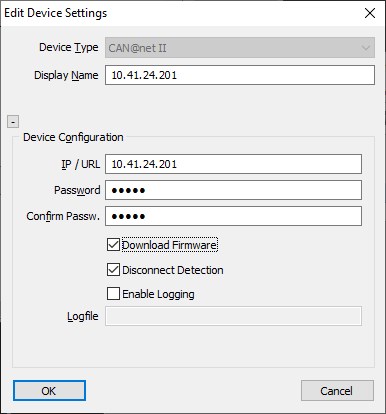 Thanks for the info. I’m out of the office through the 12th, but I reached back to one of my coworkers, it sounds like this has resolved the issue we were having.

Is there a flash utility and firmware that avoids the need to ram load the device every time? If so, can we get a copy of that?

Why isn’t the firmware load option enabled by default in the VCI driver/manager? Also, maybe some documentation clarification on this issue would be helpful. That the device required load on first use definitely wasn’t clear to us.

Given the device EOL, we do no have a flash utility and firmware that stops the RAM load for the device.

As for why it’s not selected on default within the CA3M, we have sever CAN devices that use this utility that do not require it to be toggled. I submitted the request for the documentation to updated for these devices.