1) process image1148×236 52.1 KB
RDRREC function is used to read the Process Image (as described in the CM CANopen user manual): 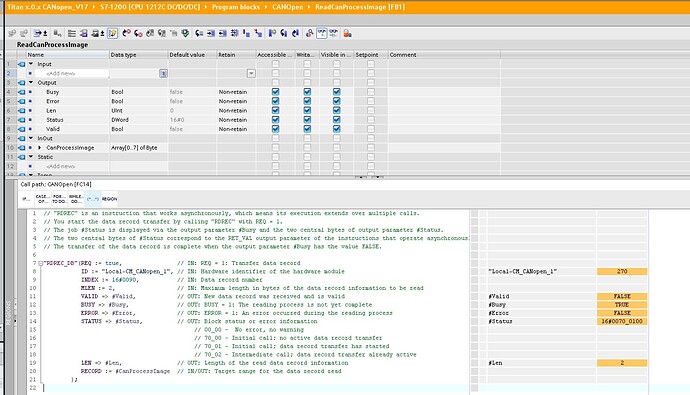 2) RDREC1411×808 239 KB
Data record number (INDEX) is 0090h as specified in the CM CANopen module manual. But there are only zeroes coming in the CanProcessImageIn and CanProcessImageOut arrays.
PS. CANopen network itself works because i’m receiving heartbeat signal from the step motor driver and network indicators are green.

Any ideas what could have gone wrong?

Maybe will be useful for someone.
Size of the “CanProcessImageIn” and “CanProcessImageOut” arrays must correspond to the size of the data being read from the device or written to the device as it was configured in “CM CANopen Cofiguration Studio”. Otherwise you have a read/write access error. That was my mistake.

So, this issue is closed.