We have been using the 3g+ FLB3202 extension card for a few years. Recently we have received SIM cards from AT&T that are not working the the extension card. We have noticed the SIM cards have a smaller gold contact area than previous SIM cards that do work. See attached image. 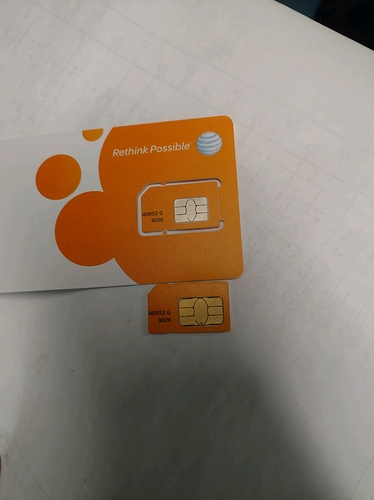 This is the first I’ve heard of different SIM cards being issued. Can you put in the new SIM card and then give the card about 5 minutes to initialize and then grab a backup.tar file of the device from eBuddy with the support files included? I want to check the event logs and see if anything is showing up for the signal strength

The pad size should not matter the contact points on the simcard are going to be the same. You might need to check with ATT if the simcard supports 3g.

And here is the tar for the SIM card that works, the one with the larger contact area.
eWON_GoodSIM.tar (186.5 KB)

Are you sure that this SIM card and the previous one have the same APN?

I have tried several different APN settings but none seem to work. Broadband has always been the one that works and I have used others I have found on the AT&T website.

There is some question whether the new cards we are receiving have been activated by AT&T. To my knowledge the eWON wizard is a passive process of establishing the link to the tower, but does not actually activate the SIM on the account. Correct?

The Ewon wizard is just establishing the link to the tower, but it will require that the correct APN/SIM Pin/User/Password are correct. Usually it’s just the APN that’s needed, but depending on who you bought it from it may require those additional settings.

Did you purchase the SIM card directly from AT&T or who did you get this through?

We receive the SIM cards directly from AT&T but I’m hearing of a shift in procedures in that the new cards are not pre-activated by AT&T when sent to us.

We will verify next week and give an update.

Ok thanks for the update, let me know what you find out

Just wanted to check if there was an update on this?

Thanks for checking in. Coincidentally, just this morning we got back to configuring the eWON with the SIM card which had the slightly smaller contact area. Prior to today we contacted AT&T, provided them the IMEI number from the Flexy cellular card, and received confirmation from AT&T that the card had been activated. The eWON completed its configuration without issue.

Up to now, AT&T would send us SIM cards that were already activated, even without know the IMEI number. I believe receiving the cards pre-activated resulted in some period of time that we were charged prior to the card actually being used in the eWON, even though the delay between receiving the cards and putting them to use wasn’t very long.

Our company changed our policy so that now the cards are not activated until the moment we employ them in an eWON.

So, to the point, the issue does seem to have been with the activation of the SIM card.

Thanks again for standing by to help!

Thanks for the update Dean, glad to hear that you got it up and running!