We have a system that communicates over two IXXAT devices:

The problem is that after the update it is not possible to initialize the CAN-IB200 through the API commands anymore. It is throwing an error as shown in the picture.

Any piece of advice to make it work as it was before?

I’m wondering if it might be running into issues if there’s more than one VCI driver installed. Can you make sure that the old VCI driver is uninstalled? I’m going to escalate this ticket to some colleauges in Sweden and see if they have a reference for this.

Thanks a lot for the answer. I uninstalled the drivers in both cases:
From V3.5 to V4 (it is asked automatically during the installation)
From V4 back to V3.5

I even tried to uninstalled the version V3.5 manually and install again V4.

When I install back the V3.5 the nodes in the CAN network are listed. I think it is an issue with the API Manager. We have the last version (I think it is 6) but after installing V4 it appears the CCI error that I sent in the picture.

Let me know if I can provide more details.

Did you have the chance to take a look into the issue?
Do you need any more information from my side?

Looking forward to reading from you.

Sorry I think it may have run into some issues when we were changing over to the new support system.

They wanted me to ask you the following:

Thanks for contacting me back.

Let me know what else we could try. I will be happy to try.

Can you test the NetManage from the CANopen Master API.

You’ll need to copy the CMD and EXE into directory where your program is. Then start it with the CMD files.
Maybe you could change the Baudrate (the parameter after the SELECT), I set it to 500 kBit.

Hope this helps to find the problem.

Thanks for the effort and taking the time to help us.

I followed all your instructions and we can see the 2 boards but the new device is not able to see the nodes.

I attach the pictures below 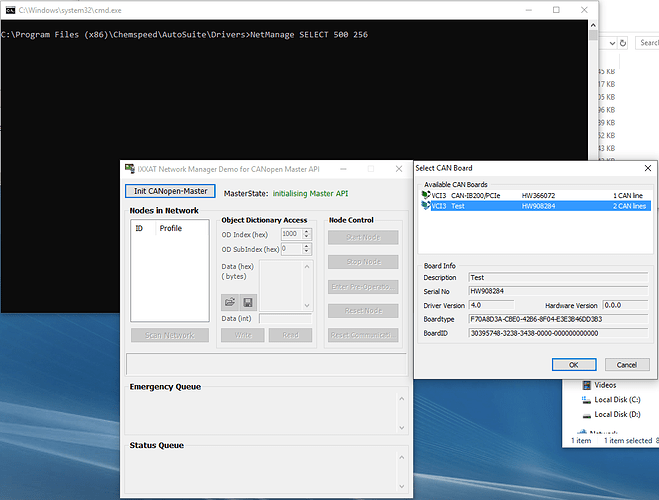 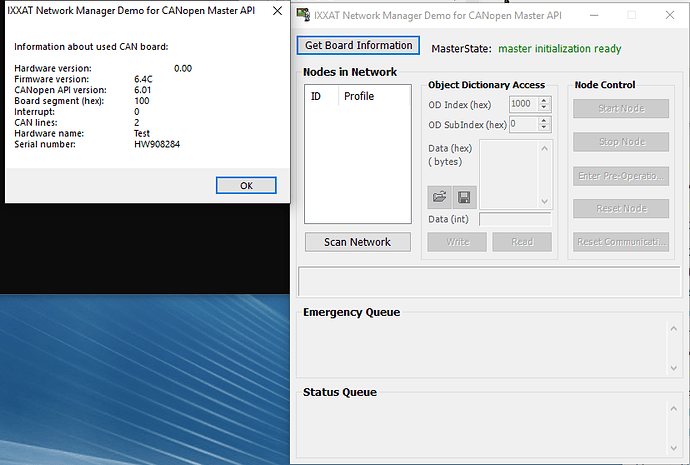 Let me summarize some of the test cases:

Usually we work with a combination of PCIe and Can@net II, but it does not support Windows 10. That is the reason we are trying with the new device.

What else can we try? Can I provide you any more information?

Thanks in advance for your help.

Testing with a newer CANopen Master API (V 6.3.56) does not improve the results.
In fact, the PCIe is not detected when the CAN@net NT is connected and the issues finding the nodes are still there.

Topic closed due to inactivity.