I am hoping to run the eWon eCatcher Mobile app on the new M1 Macbook. The new Macbook allows for download of ios apps. I was trying to download the eCatcher mobile app and received the following error message: 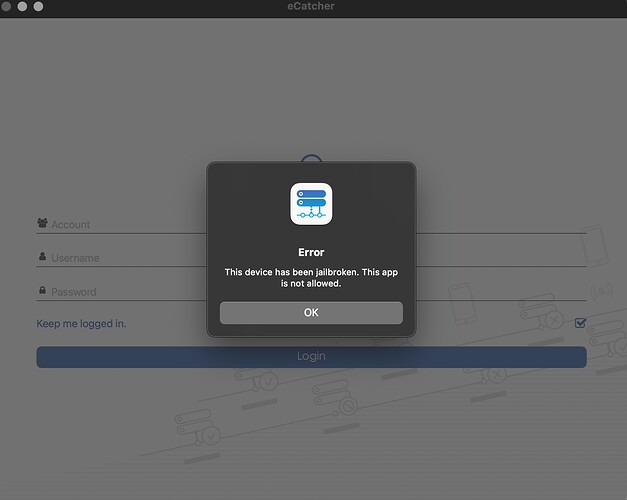 The mobile app will ideally allow me to access eWons on my Macbook without needing to use a virtual machine.

You will have to check with Apple on this. The error message indicates that the device has been jailbroken and the error is coming from the Mac, no necessarily due to the app.

In the meantime, on this device you can access your Ewons at m2web.talk2m.com.

Thanks, I will look into it on the Apple side. It is a new MacBook(has not been jailbroken) and that message has not been shown for other apps. I appreciate you sending over the URL!

Can I use the URL you sent me to VPN into the devices? I was under the impression that the link you sent me only allows access to the Web Dashboard, and does not provide a VPN into the system.

It does not create a VPN connection. I can access the Ewon as well as HTTP, VNC, and RDP services on devices on the LAN.

I will check to see if the developers have seen that error, but it doesn’t look like it’s coming from our App. Some Apps can be installed on jailbroken devices and some can’t, which is probably why other Apps don’t cause the error.

Developers had same answer and recommended asking Apple about the error.

A post was split to a new topic: Argos mobile app

Hi, I have same issue on Apple M1

Have you had any other apps give this error? Can you try to install another app, like the one below and see if you get that error? 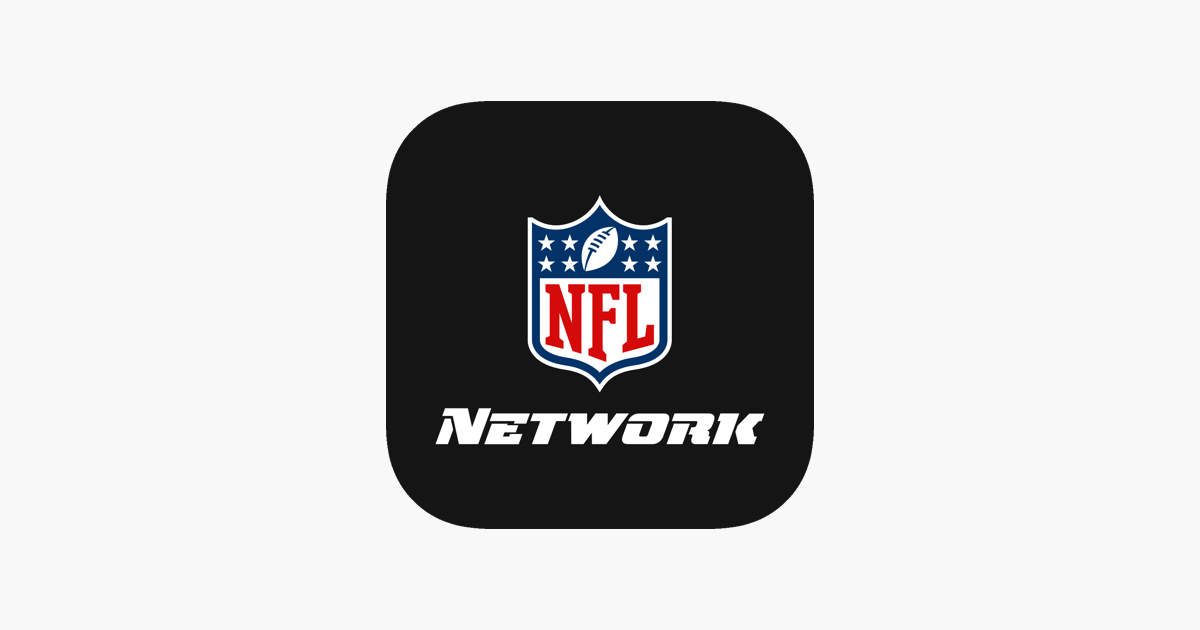 ‎Exclusive NFL Network programming and NFL RedZone* is now available to fans living in the United States. Using an iPhone** or iPad, fans can watch their favorite NFL content live with a subscription to a participating cable provider. The app...

I have reported the issue to the eCatcher development team again to take a look at this.

I have some additional information on this topic, as I too, get the same error. 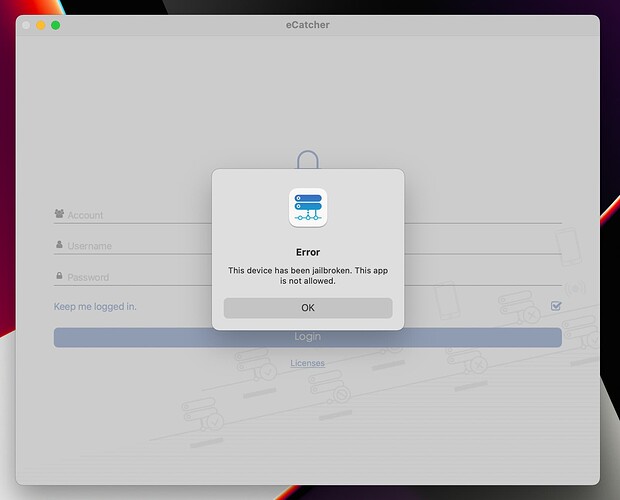 As I understand it, only M1 Chipset Macs can run applications built for iOS on iPhone and/or iPad. These iOS apps are made available for install, directly on the App Store now, in a separate column for iPhone/iPad.

I have a copy of the crash report I can send, but due to the content, I’m not sharing it publicly, on the forum, until I review all the contents.

It has to do with the eWON eCatcher Mobile App’s detection of the device it is installed on. It has to be set up differently after iOS14 and the release of the M1 Mac Chipsets. As authorized iOS developers, your App Development Team should have access to the specifics of the above, within Apple’ Developer Documentation for iOS 14 and M1 Chipset Macs. 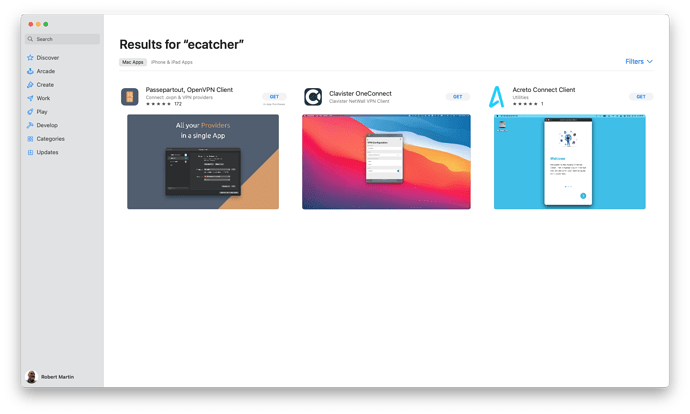 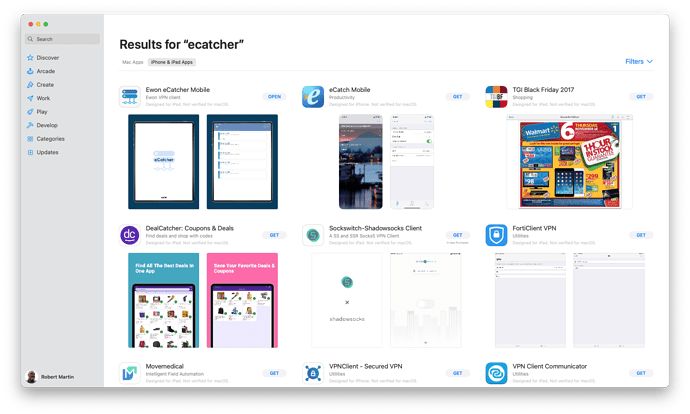 From my MacBook Pro 16" 2021 w/ M1 Max Chipset, the above are screenshots of the App Store when searching for “ecatcher” - you should notice two different tabs. The first tab is for MacOS Native Apps. The second tab is for iPhone & iPad Native Apps that “work” with M1 Macs.

My understanding is that if a iOS App developer doesn’t want their iOS Native App to show up in that list, there is some specific code/flag they have to put in their app. Otherwise, Apple’s App Store assumes it should be fully compatible with M1 Macs.

There is also a bit of code in iOS Apps that detect what Device/Device OS it is being installed/run on. AS I mentioned above, this section of code, within the eCatcher App, needs updated to be in line with the iOS 14/M1 Mac specific detection process.

I know the eWON eCatcher Mobile app is actively developed and updated, but this information must have missed the desks of the development team, when iOS 14 & the M1 Macs came out.

FYI: There are other iOS Native Apps that have or have had this same issue. Most of the developers have resolved it though. The RSA iOS App for instance, had this issue back in the first part of 2021. I understand it has been fixed since then.

I also have an iPhone 13 Pro Max running iOS 15.5 and it does not have this issue.

When I get home from the office, I can test my MacBook Pro (15-inch) 2017 and see if it can even see the iOS App in the App Store. I don’t believe it should be able to.

Thank you for the info! I had thought this issue had been fixed already, but I could be wrong. Did you check to make sure you have the latest version released last month (2.0.3)?

I will send a message to the Ewon team to get a status update on the issue and let you know when I have more info.

Looking into it further, it appears it was due to a library used by the app, which should be updated now according to this: Fix false positive on Mac M1 by urielvexi · Pull Request #16 · thii/DTTJailbreakDetection · GitHub

I will check to make sure the app is using the new library.

I imagine it’s the former and it couldn’t be included in the June release for some reason, but I’m not positive. I’m sorry for the inconvenience. I will let them know so we can be sure that it will be fixed in the upcoming release.

In case it helps, I’ve attached a screenshot of my “About This Mac” and yes, I masked the serial number. 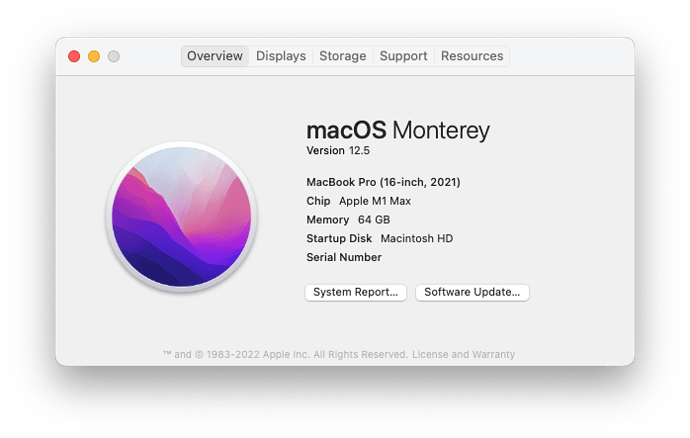 I just wanted to let you know that I am planning to meet with the Ewon engineers next week and we will discuss this issue. I’ll let you know what the plan is then.